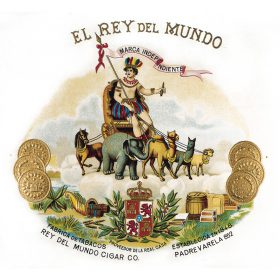 The El Rey del Mundo brand of cigars was created by Emilio Ohmstedt in 1848, at the same time as Sancho Panza. The brand was very small at the time. In 1870, when Mr. Ohmstedt died, the brand was transferred to Mr. Antonio Allones, who had immigrated to Havana and worked in the tobacco industry.
El Rey del Mundo means “The King of the World”. From the beginning, Antonio Allones decided that this brand should be one of the highest representatives of Cuban know-how and for this reason he used one of the best tobaccos in the Vuelta Abajo. In 1905, the company was transferred to Diaz Hermanos y Cia in the possession of Candido Vega Diaz, who later renamed it Rey del Mundo Cigar Company in the late 1930s.

In the forties, the factory was located at 852 Padre Valera Street in Havana. It also owned other brands such as Flor de Rafael Gonzales, Sancho Panza and the famous Don Candido (from owner Candido Vega Diaz).

By the fifties, El Rey del Mundo cigars had already acquired a solid reputation. They were the most expensive cigars in the world at that time and were the favourite cigars of wealthy aficionados.

In the sixties and seventies, El Rey del Mundo cigars maintained their rank as the great Cuban cigars. The brand was warmly recommended by Zino Davidoff himself in his book “The book of the cigar connoisseur” in 1967, saying that every cigar connoisseur had to have a few boxes of these cigars, as well as Rafael Gonzales.

El Rey del Mundo cigars became less popular in the eighties in favour of more powerful cigars. Their export production fluctuated around 1% of the total volume exported by Habanos S.A. in the years 2000 and 2001. 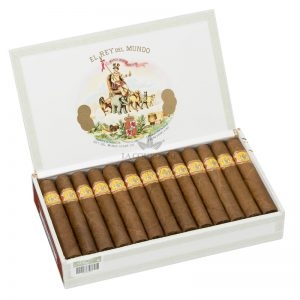 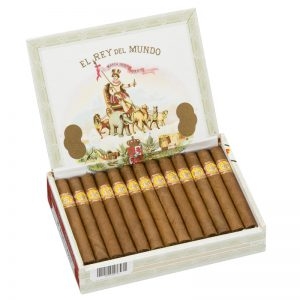